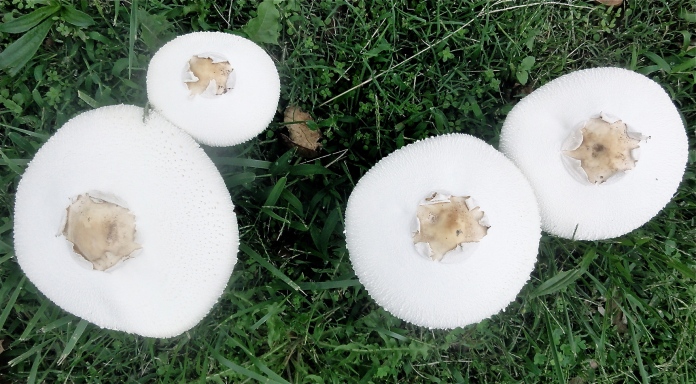 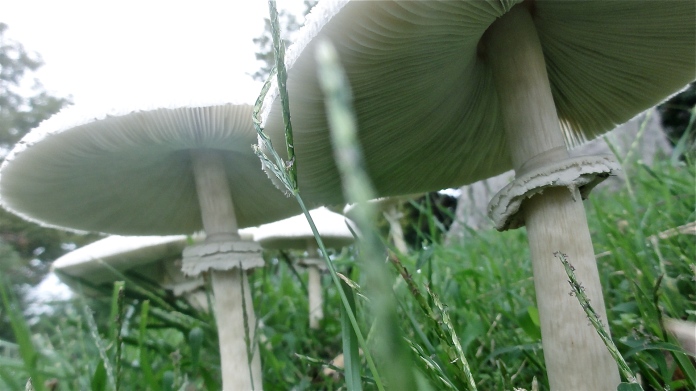 Big white mushrooms are popping up all over Rehoboth because of all the rain over the past several weeks.  Or are they toadstools?  Each term goes back centuries and isn’t very well defined.  Generally speaking, a mushroom has a stem, cap, and gills.  Toadstool is a term applied to a poisonous mushroom or a fungi with a classic umbrella-like cap and stem form. 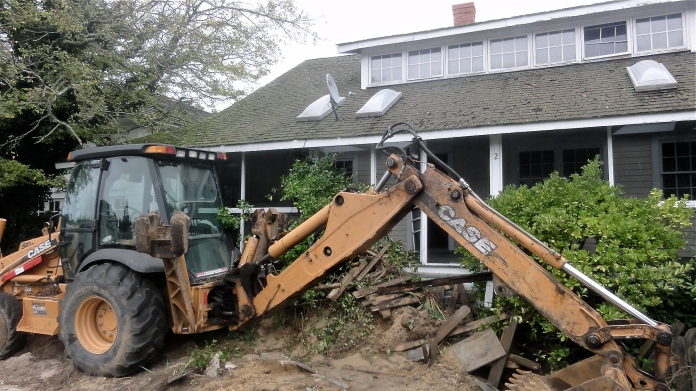 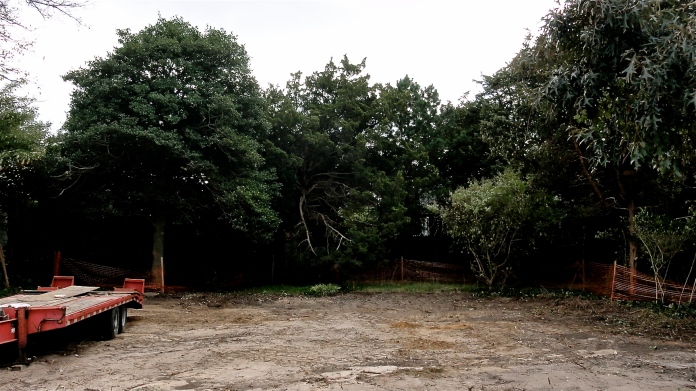 After the summer tourist season comes the fall tear down season.  There are several old cottages slated to go starting this week. Before and after on Oak Avenue. 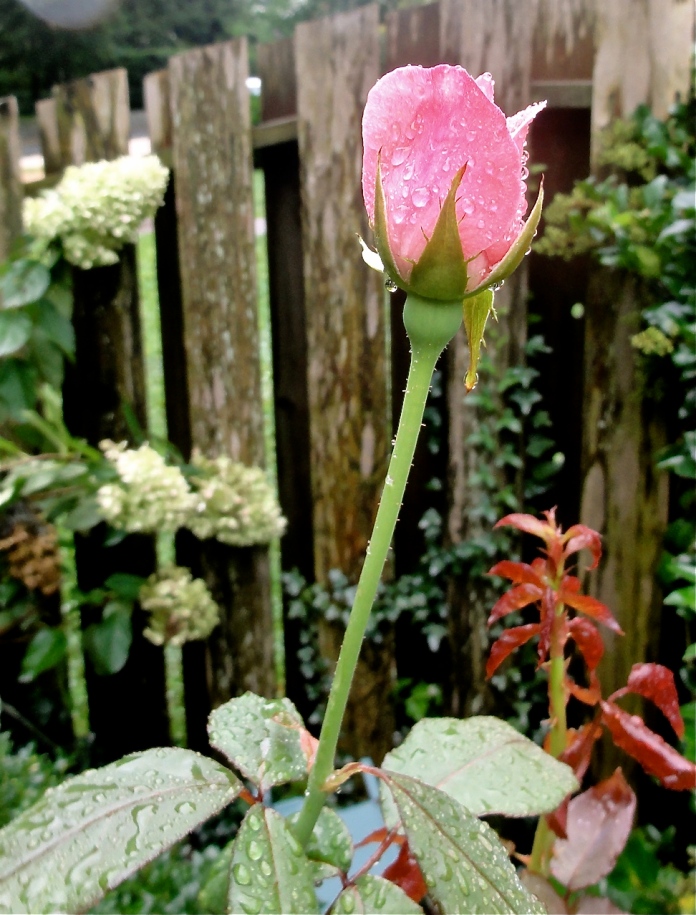 Why does it seem whenever there’s an extreme weather event or natural phenomena that evangelical right wingers fly into a tizzy and start hollering about how it’s God’s punishment for something they don’t agree with?

Seriously, who can forget the numerous claims that Hurricane Katrina was God’s retribution against the sodomites and licentiousness of New Orleans?  Seems America’s abortion policy was to blame too.  Haitians, according to televangelist Pat Robertson, brought the earthquake that racked their nation on themselves by making a deal with the Devil during the 1791 slave rebellion in exchange for getting their freedom from France.  Then there was the anti-gay activist who made headlines earlier this year by blaming all those unexplained bird deaths on the repeal of “Don’t Ask Don’t Tell.”

So when Hurricane Irene threatened, I knew it would merely be a matter of time until some kook stepped forward to say something outrageous. How could they not? This storm was so irresistibly dangerous, threatening as it did the “Left Coast” of the United States and New York City, less than a week after an earthquake!

Sure enough, Presidential candidate Michelle Bachman, bless her heart, just couldn’t resist.  At a rally in Florida she told supporters that Hurricane Irene and the recent earthquake were God’s way of telling America’s politicians to rein in spending.  Naturally, her spokespeople said it was a little joke to emphasize her commitment to smaller government.

I’m skeptical. After all, Bachman claims God called her to run for Congress and then told her to sponsor a law in Minnesota defining marriage as between one woman and one man.  The girl’s got a pretty good pipeline it seems to the Almighty.

This concept of “divine retribution” is neither new, nor limited to American evangelical conservatives. Minister Louis Farrakhan asserted that Hurricane Katrina was God’s way of punishing the nation for its warmongering and racism. The governor of Tokyo said the deadly Japanese earthquake and tsunami were payback for what he termed national egoism.

Seriously, are we still living in the 18th century?

I ask this because I’ve just finished reading a book called Hurricane of Independence about the September 1775 hurricane that crashed into the Outer Banks of North Carolina and Norfolk, Virginia, and then raced up the East Coast in a path very similar to Hurricane Irene, striking all the important colonial capital cities.

People back then had very little understanding of hurricanes. Most attributed big storms to divine Providence. Americans believed in a wrathful God who punished their sins and a merciful God who protected them from their enemies.  So when this hurricane struck on the eve of the Revolution, the American patriots were confused.  Why would God punish them rather than sending a storm against the fleet of British redcoats trying to rob Americans of their liberties?  Could the storm be a divine signal that their cause was not quite as favored as they believed?  Or was it merely a heavenly reminder to live virtuous lives?

Because the hurricane killed both colonists and British, the consensus seemed to shake out that God was indeed on the side of the Americans in their glorious cause for liberty and was punishing the British for their tyranny.  How about that for a rationalization?

I have to wonder what kind of meaning the evangelical right wingers would give to the fact that the wrath of Hurricane Irene seemed to pass Rehoboth by.  We had less wind and rain than expected.  Yes, the beach lost some sand, but the dunes held. At my house, we never lost power.  It blinked a couple of times while I was preparing a pork roast and some patty pan squash, but that’s all. The front porch didn’t even get wet, despite my removing the protective canvas awnings.

And get this, a rose bloomed in my garden during the middle of the hurricane. A pink rose. 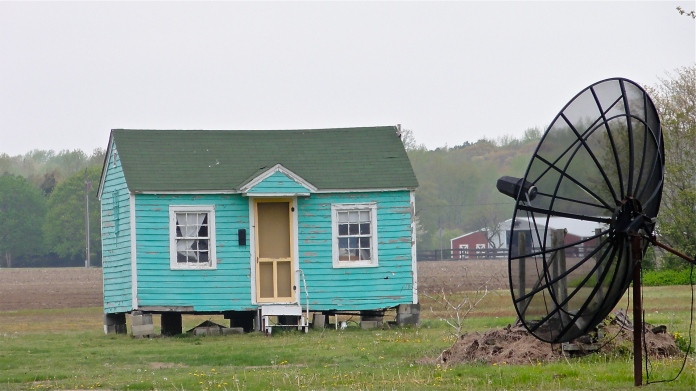 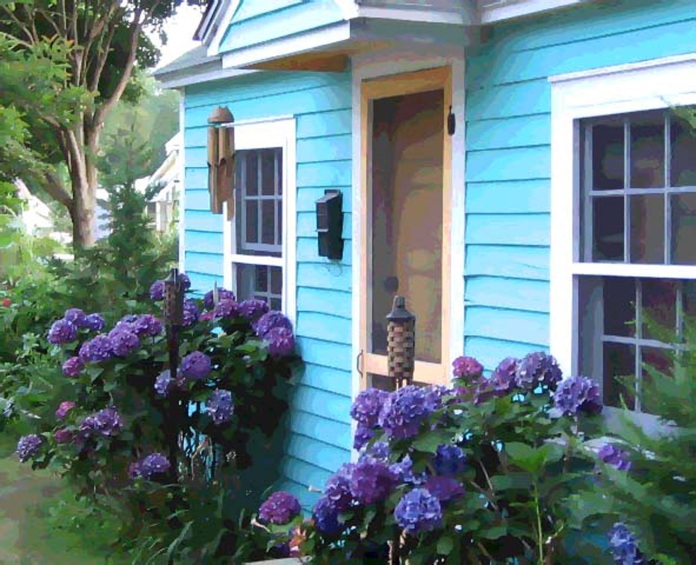 Five little turquoise cottages used to sit at the corner of Columbia Avenue and Sussex Street in Rehoboth, surrounded by hydrangeas and zinnias.   At one time they were motor court cabins.  More recently, they were summer rentals.   I can’t recall exactly when they were removed and the lots sold.  Five?  Ten years ago?   I recently spotted one of the cottages in a pasture out on Coolspring Road.  Wonder if there are any other survivors? 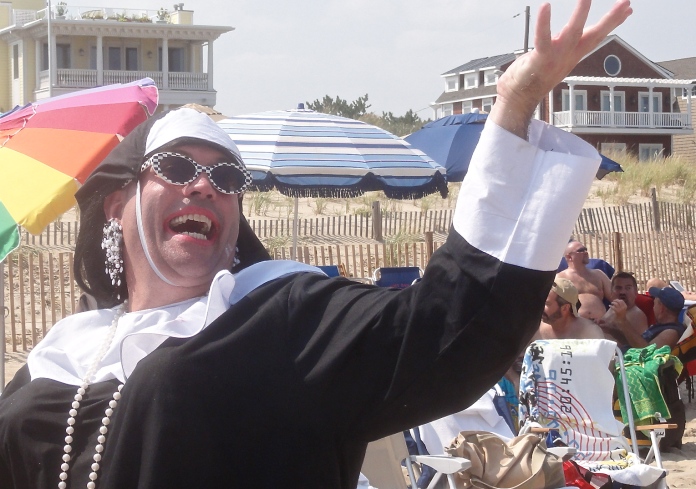 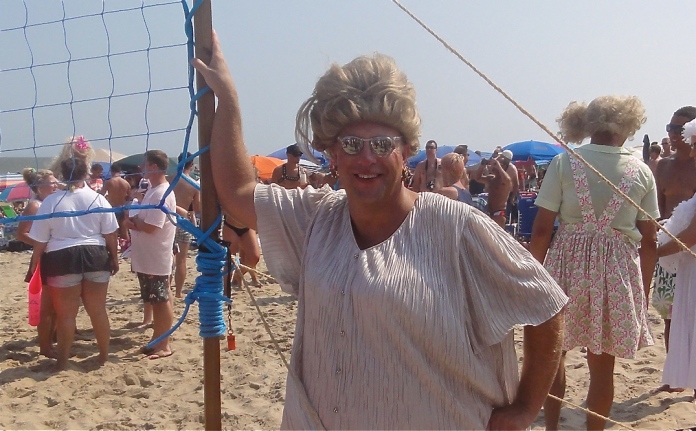 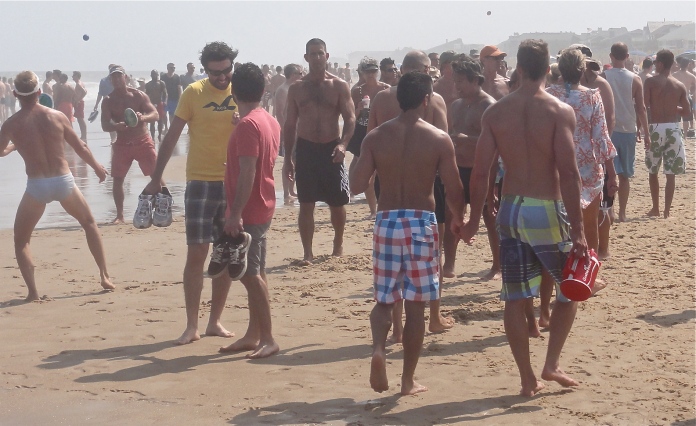 Drag volleyball is a Rehoboth tradition on Poodle Beach the Sunday before Labor Day. This year’s game featured the Von Tramp family vs. the Angry Birds. 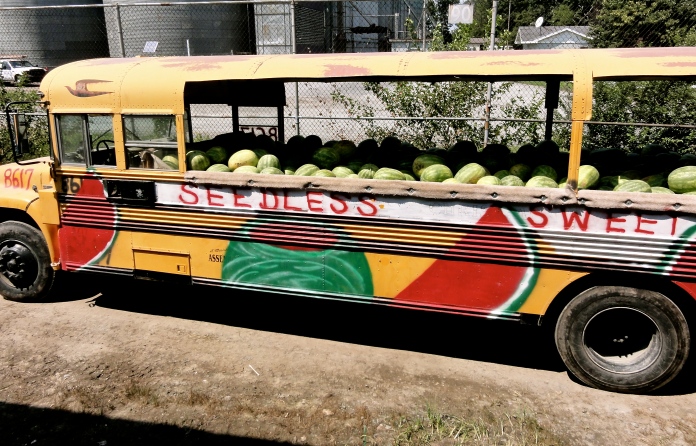 Eating watermelon is one of the most symbolic rituals of summer that I can think of, especially for a Southerner like me.

Whether it’s a simple slice enjoyed on the beach or as the base for a margarita, there’s nothing better than some “sweet meat” on a hot August afternoon. Heck, I even like watermelon grilled with a little olive oil and salt and pepper — six minutes on one side only. Goes well with crab cakes.  So, naturally, when I heard about a watermelon market over in the town of Laurel on the western side of Sussex County, I had to go check it out.

The proper name for the market is the Laurel Farmer’s Auction Market.  One of the oldest established produce markets on the East Coast; it’s where you want to be right now to get in on the melon action in Sussex County. It’s also where I met the watermelon man.

The watermelon man was lean and tanned, with short hair, a big Saxon schnozz, and a hawk-like gaze.  He kind of reminded me of that gay Welsh rugger Gareth Thomas, only older and not so hot. But whereas Gareth plays with balls, this fella works with watermelons.  Lots and lots of watermelons.  He and his crew follow the season and the harvest from Florida up through the Carolinas to the Delmarva peninsula and then back down to Florida and over to Mexico.  He was kind enough to give me a little tour and tell me all about Delaware watermelons.

Some of the nation’s finest watermelons are grown right here in Sussex County on 2,700 acres of well-drained, sandy soils. The western side of the county is really the epicenter of the industry, and it’s been that way since the 1850s when farmers filled up boats with watermelons and sent them down the Nanticoke River and on to Baltimore and points beyond.

Delaware watermelons begin to ripen in July and the picking continues through mid-September.  So far, about a million pounds of “sweet meat” have come through the Laurel market.  And come it has, piled high in the beds of pickup trucks and on special watermelon buses (old school buses with the tops ripped off and the seats and windows stripped out.)  Some of them are even “customized.”  Pimp my bus.

Why school buses?  Well, first of all, there’s very little demand for old ones.  They’re cheap.  And because school buses are automatic drive, they work pretty well in the sandy watermelon fields.  Each bus can hold about a thousand melons.

Delaware’s watermelon crop is valued at about $11 million annually.  It’s serious business. But, when you’re standing in the old 1940s-era wooden market looking at all the watermelon buses, it still feels kind of quaint.

The crop yield has so far been good because we’ve had hot a lot of dry weather. Too much water causes a watermelon to swell too quickly and dilutes the sugar in the fruit. Too much rain and the melon may become misshapen or even split open.  The melons this summer are just right and I really wanted to grab one off a bus. Unfortunately, I had missed the actual market, which occurs in the morning.

Forced to search for a local melon on the road, I came across a little produce manned by a rather hefty woman wearing pink striped shorts and a green tank top.  Please, I asked, could she pick me out a good ripe Sussex County watermelon? Despite my culinary prowess with the big fruit, I’m notoriously inept at picking one out. She pointed to one of the greener melons and hollered that it was “sweet to the rind.”  When I asked how she could tell, she instructed me to roll it over.

All watermelons have a flat side from how they grow, and the wider the spread and the more yellow the color, the sweeter and riper the melon. This one looked pretty good, so I gave her my two dollars and put the watermelon beside me in the air conditioned cab of the pickup so it would cool down on the hour long drive back to Rehoboth.

Another accepted way to pick out a ripe watermelon is to knock on it.  A thud indicates the watermelon is ripe while a hollow sounds means it’s still got a way to go.  Because I can never trust my ear, I was excited to learn there’s a new iPhone app to help me pick out a perfect melon. It’s called iWatermelon.

Let that sink in for a minute.

Here’s how it works.  You simply put your iPhone on top of the melon and then thump it three times. The iPhone senses whether or not it’s ripe. I kid you not.   I actually downloaded it and tested it out in the Whole Foods Market in Washington where I went through four watermelons before the app finally identified a ripe one.  People stared, but low and behold the melon was indeed super sweet and ready to eat.

Feeling this must be some sort of scam, I tried the app on my head. It didn’t register, which pleased me.   When I put it on my belly and tapped three times, however, the app flashed and told me this was “a fair one.”  Hmm….Guess that makes me a real watermelon man too. 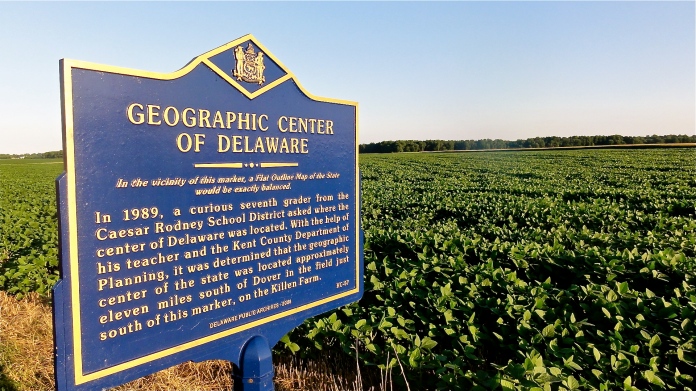 Spotted this on one of my drives through Delaware. It looks like the center of the state, don't you think? Here's the story. In 1989, a curious seventh grader from the Caesar Rodney School District asked where the center of Delaware was located. With the help of his teacher and the Kent County Department of Planning, it was determined that the geographic center of the state was located approximately eleven miles south of Dover in the field just south of this marker, on the Killen Farm on DE Route 12 outside of Felton