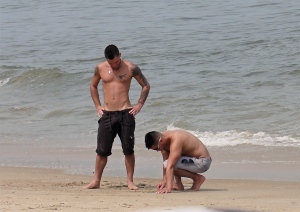 The first thing that catches your eye is the broad back fanning down to a well-proportioned seat. And you can’t help but notice the beefy arms. The epitome of summer, you’re thinking, as your glaze lingers a little too long upon the fine All-American specimen before you.

I know I’m not alone when I say I have a thing for the Adirondack chair.

Seriously, though, nothing says easy breezy summertime living like sinking back into a well-built wooden Adirondack chair with a gin and tonic in your hand and a lush green lawn tickling your bare feet. Surrender.

The historians mostly agree that this simple icon of American furniture originated in the Adirondack Mountains of New York back in the 1870s, as enterprising families began establishing mountain camps for summer tourists. They made their tables and chairs from natural and local wood. This rustic furniture, however, didn’t have a name until 1903 when a man named Thomas Lee decided to build a comfortable lawn chair for his family.

Mr. Lee and his family were vacationing at a summer cottage near the town of Westport, New York, on the shore of Lake Champlain. The Adirondacks back then were second only to Newport, Rhode Island, as a summer enclave for wealthy Eastern families. The simple chair Mr. Lee designed and built had a slanted seat and back design, which allowed people to sit in an upright position when placed on a hill. Each was made from a single pine board and had with wide armrests.

Thomas Lee offered the design to a carpenter friend in Westport who was in need of money. The friend, Harry Bunnell, quickly realized the chair would appeal to summer visitors. So without asking permission, Bunnell filed for a patent for what he called the “Westport Chair.” He got it in 1905 and manufactured it for the next several decades. The chairs were made of hemlock wood and were painted green or dark brown and sold for less than four dollars. It garnered a following in and around the region.

The chair, alas, fell out of style after World War II as modern materials such as aluminum tubing and plastics began to be used for lightweight folding chairs and loungers. It wasn’t until the 80s that we see a revival of the Adirondack chair. Some aficionados credit the New York Times for fueling the revival when in 1985 it ordained the chair a symbol of summers past and present, as important to American culture as baseball and ice cream parlors.

My Adirondack chairs are close to fifteen years old. They’re Amish-built and painted white. Only just this year have they begun to get a little creaky. I’m not exactly panicking yet, but I am concerned because getting the right chair is not easy.

Adirondacks come in many shapes and sizes and with all sorts of evocative names: Nantucket, Muskoka, Chattahoochee, and Charleston. Interestingly, the basic design has hardly changed since the early 1900s: slat construction, wide flat arms so you can rest your drink or food, and angled backs and seats. They do cost a lot more than four dollars; at least the good ones do. A quick look around Rehoboth tells me most are starting in the $200-$300 price range.

Oh sure, you can get an inexpensive white, blue, or green plastic one at Lowe’s for $17.98. It holds up to 250 pounds and claims a spine-friendly design that gives good lumbar and head support. But, really, why would you?

If you’re gonna buy an Adirondack chair, I suggest you invest a little money for something splendid. A chair made of teak tends to be the most expensive, but it will last a lifetime and cost you about $600. My favorite – cedar — has a life span of about two decades, more if treated properly and painted a nice white, green, or red. Some places tout pressure treated pine that will last forever. I’m skeptical; my neighbor’s pine chairs lasted only three years before the termites got ‘em. But, then again, his back yard is probably “wilder” than most.

I’ve been noticing more and more Adirondacks made with polywood, a hard plastic spun from recycled milk jugs. While the tree hugger in me likes the concept, my inner snob won’t have anything to do with such a maintenance-free chair that comes in colors like grape, lemonade, mango, and hot pink. And don’t get me started on Adirondacks built to look like fish, surfboards, or sea shells.

All that cutesy stuff might work fine down in Bethany Beach. But here in Rehoboth, I think we should aspire instead towards the classic Adirondack. Sturdy and stoic. Purposeful and proud. The way it was meant to be.