Corner of Surf Avenue is always getting swamped in a storm. 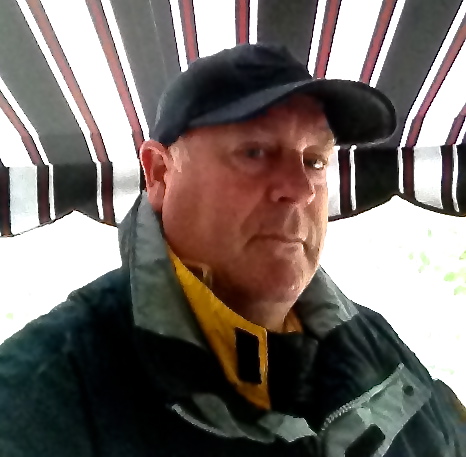 Monday afternoon. Ready to check out the beach. 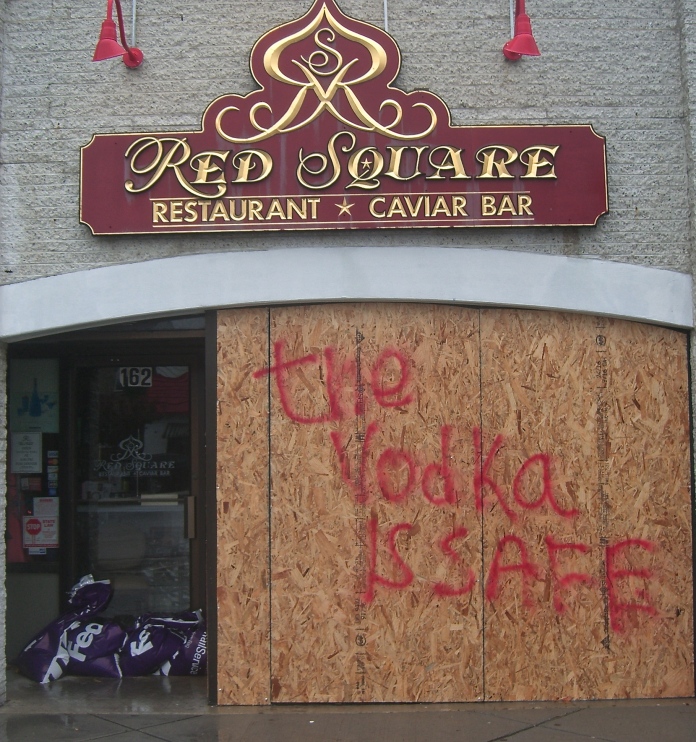 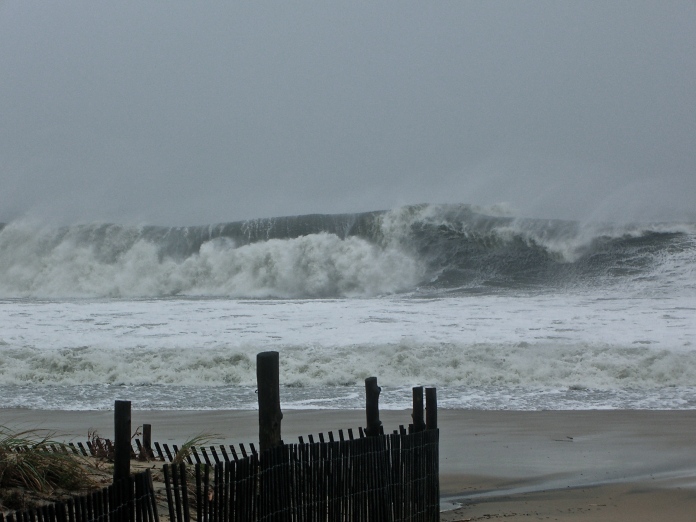 View from the beach. Hurricane still off shore. 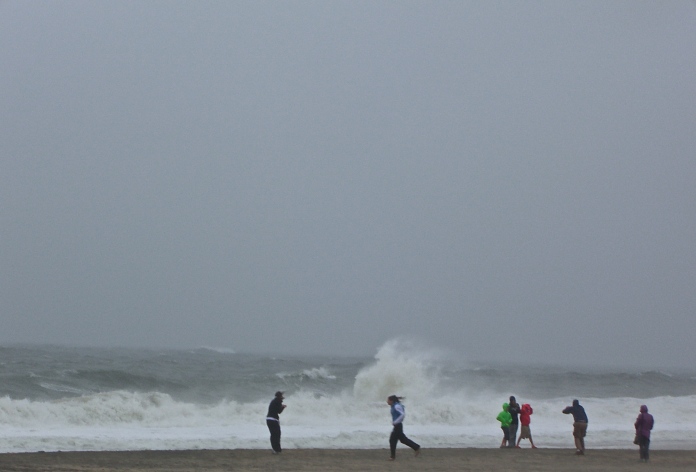 Not too threatening yet. 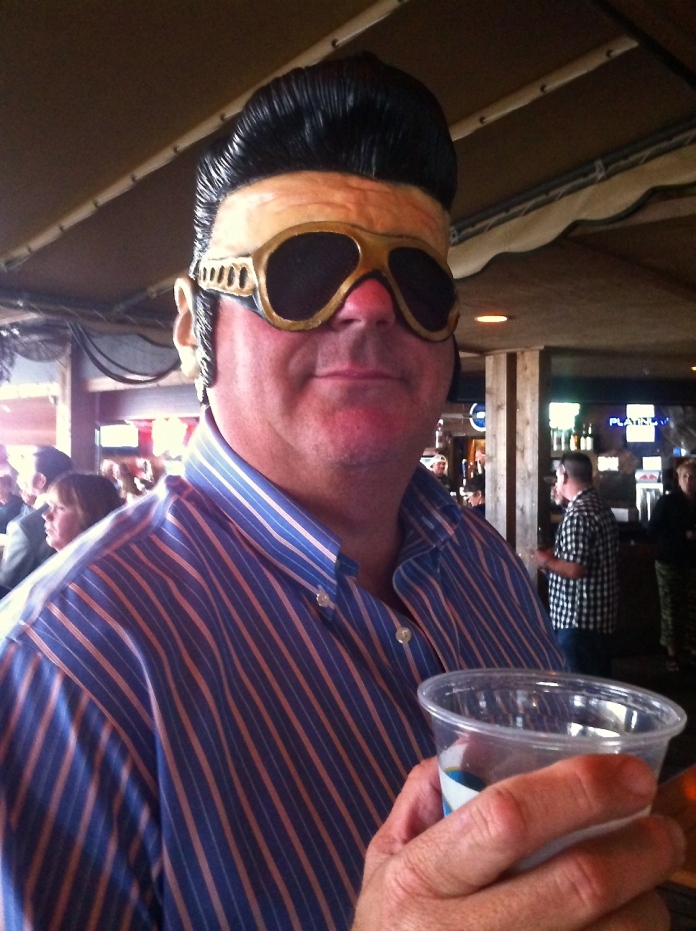 They arrived in mini vans and on walkers and with canes. Aged fans in super-sized sweatshirts and silk shirts emblazoned with all sorts of Elvis imagery. A couple of old gals said they had stood in line for hours to get front row seats at the 12th annual Elvis Festival at the Rusty Rudder in Dewey Beach.  A sign on Route One promised twenty-two Elvis impersonators.  How could I resist?

This year marks the 35th anniversary of Presley’s death from heart failure and drug overdose.  It seems longer, but then I don’t remember Elvis’ passing.  At age sixteen, my musical tastes certainly did not include a bloated and bejeweled Las Vegas lounge act.  I was more interested in Elvis Costello, the British musician in the oversized eyeglasses and tight suits who was part of an edgy new style of music called punk rock.  It wasn’t until I arrived in Athens, Georgia, for law school and started exploring that city’s diverse musical scene that I started to learn about and appreciate how Elvis Presley’s music and persona changed the country.

Presley, I could even argue, even changed me, or in the least, helped start my writing career.  Disillusioned with law, I moved after graduation to Washington, DC, to try and get into publishing.  Boy, was I naïve.  Nobody wanted to hire an over educated kid who knew nothing about the industry.  I was about to give up when I got a call back for an interview with a small firm that published materials for the nonprofit sector.

The interview went well, especially because the woman doing the hiring had as unconventional a resume as I did.  Moreover, she had a black velvet Elvis painting hanging on her cubicle wall.  Realizing it was now or never, I leaned in and offered my prized toenail clippers, the one with Elvis Presley’s face on it, in exchange for the job.  Of course, she took the bribe.

The Dewey Beach Elvis Festival is just one of many around the country and around the world.  Fans gather in places like Indiana, Hawaii, California, Sao Paulo, Las Vegas, and, of course, in Memphis to pay homage to “The King.”  Dewey’s festival is one of the largest and the only one held mostly outdoors (on the bayside deck).  Organizers say about a thousand people come through the Rusty Rudder during the event, which runs six hours on Friday night and twelve hours on Saturday.

Saturday night is always the big finale with awards given in two divisions – professional and nonprofessional.  Professionals are also known as ETAs (Elvis Tribute Artists).  ETAs supposedly earn seventy percent of their living as Elvis impersonators.

The Elvises – Elvi? – at the Rudder that Saturday afternoon were men from both categories. I’d guestimate most of them were anywhere from 35 to 60 years of age.  Nearly all sported the ubiquitous side burns and pompadour hair.  According to the program, most of the performers were from the mid-Atlantic region.  There were a couple of younger versions of the King, including one cute high school kid in tight jeans and an open front plaid shirt.  He was carrying a guitar, clearly a clean cut Elvis, circa 1950s.  Much to my chagrin, I didn’t see anyone in a cape.

After a couple of orange crush cocktails, I was getting a bit restless so I decided to cruise a table full of Elvis paraphernalia for sale.  The flashing blue eye glasses were popular with the crowd, but it’s a rubber Elvis mask that caught my eye.  I slipped one on and leaned back against a wall.

As I watched the mostly older crowd singing every song, I couldn’t help but think it ironic that these fans and this music could have been so controversial back in the 50s and 60s.   According to church leaders and leading conservatives, Elvis was a menace to society.  He was blatantly sexy, sang black music, and was, therefore, a threat to good little white girls.  Kids who listened to his music were headed on a one-way path to juvenile delinquency. I wondered what crimes the heavyset super fan stamping her walker to the tune of “Hound Dog” had committed in her youth.

Yes, it was easy to laugh at the thought of aging Elvis fans as cutting edge. But then that’s always the way it is between generations.  It’s hard for me to believe it when I hear Elvis Costello’s music being played as soft rock in a Starbucks.

“The King” though presided over the birth of a great new means of expression – rock music – which was followed in turn by television and now by the Internet.  As I sipped my third orange crush cocktail, it hit me that the fat guy in the black jumpsuit working a table of aging baby boomers wasn’t a joke.  He was live history, baby, the tail end of a significant cultural change.  And that’s sort of cool.  Made me almost want to drop down on one knee and bust out an Elvis-like arm swing.  Almost…