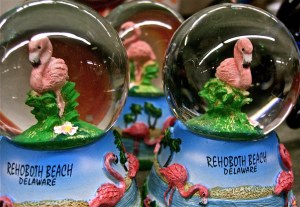 As a native Floridian, I’m a sucker for a good tourist trap. Give me a couple of trash-talking parrots and a balsa wood backscratcher and I’m in heaven. It’s a taste acquired, no doubt, during long family car trips in the late 1960s.

If the Sunshine State didn’t invent the tourist trap, I think its fair to say it perfected the art. As automobile use increased and new North-South highways lured millions of tourists to the country’s new exotic southernmost destination, entrepreneurs in small towns along the way figured out how to trap some of that lucrative trade.

It was vintage Florida, baby, back in the days when you didn’t need million dollar special effects to hold an audience’s attention. Promoters capitalized on the myth of Florida as both Garden of Eden and jungle underworld to capture the imagination and the wallets of passers. As a little boy, I couldn’t get enough.

Imagine my excitement then when I heard that the local chamber of commerce was championing a proposal to build a new Rehoboth Beach tourist attraction. Sure, there are several places where you can buy a hermit crab and a puka shell necklace, but we don’t have any real good traps in this town.

Destination Station Center is what this new tourist trap is being called. It’s described as an exploratory, transportation hub, and visitor center that will attract hundreds of thousands of visitors per year. People driving down Route One will pull in, park their cars, spend some time learning about energy issues, use the restrooms, and then happily pile onto buses to come into Rehoboth Beach for the day and spend wads of cash.

Busloads of students will come. Fathers will take their sons to the bus depot on rainy days while their wives go shopping. If you believe what you read, this $12-14 million, mini version of Disney’s Epcot Center is going be a major tourist East Coast tourist attraction. And, it will help alleviate car traffic in Rehoboth.

Hmm… as a natural skeptic, yours truly can’t help but wonder if kids will really look up from their video games and beg their parents to pull the SUV into Destination Station when they’re this close to getting to the beach. Will teachers really want to bring their students here than to the Franklin Institute in Philadelphia? And what dad is gonna take his kid to hang out at a bus terminal on the side of a highway with Hooters now being so family friendly?

As someone who loves a good tourist trap, I’m less than enthused. The whole concept seems so ordinary, so unimaginative, and so off the mark. Why the focus on energy issues and programs called Whatzits and Spy Eyes (whatever they are) when you’re headed to the beach? Wouldn’t it be more interesting to engage visitors about the environment and development challenges facing the region’s greatest natural asset, the place they’ve come to vacation? That would be unique.

Throw in some Rehoboth Beach snow bubbles and backscratchers while you’re at it and you’d have a pretty nifty little tourist trap, don’t you think? Just make sure the bubbles are made of real glass and feature horseshoe crabs instead of flamingos.