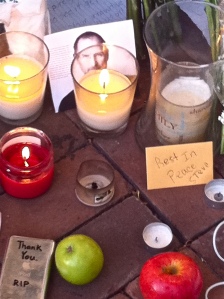 Like millions of other Americans, I heard that Apple founder Steve Jobs had died not from a TV or radio report but via an email received on my iPhone. In the days following his death, I learned a lot about this visionary and talented man, but the one thing that caught my attention was his study of calligraphy at Reed College in Oregon. A decade later when he was designing the first Macintosh computer, he made sure to incorporate good typography into the product. It’s been an Apple staple since.

I understand his fascination with calligraphy and the art of writing.  I mastered block letters then Palmer Method cursive at an early age.  While other elementary school kids gripped fat green and red pencils, yours truly was already using a slim yellow Ticonderoga.

At the encouragement of my maternal grandparents, I incorporated graceful lines and extended loops into my handwriting.  Good penmanship was the sign of a well-educated boy, and they felt it their duty to introduce me to the elegant Spencerian script from the golden age of American penmanship.  I actually practiced handwriting.  On purple paper, no less.

My paternal grandparents, on the other hand, preferred to put a football in my hands and take me to games at Florida Field. Throwing a perfect spiral was just as important a skill for a Southern boy to master.

I’m convinced the reason I got through law school was because my handwriting was neat and legible. It certainly wasn’t because I studied too much.

Law school was twenty-five years go.  About the only thing I write by hand today is my signature on a credit card slip.  And when I do have the occasion to write something longer, it pains me to see the result.   Like my ability to toss a perfect spiral, it seems my handwriting has gotten wobbly from lack of practice.

I compose text messages and emails rather than writing letters. Ideas and observations are no longer jotted down in a chartreuse leather bound notebook, but, rather, typed into one of Steve Jobs’ white tablet computers made of aluminum, plastic, and oleophobic-coated glass and then efficiently filed in folders and tagged with keywords so I can easily find them again later when I’m ready to work on a column or blog posting. No more illegible scribbles. No smudged Post-it notes. No more scrambling around for a pen that works.  No longer tethered to a computer at a desk, I can write while riding the crosstown D6 bus in Washington or sitting on Poodle Beach in Rehoboth.

Truman Capote said you weren’t a writer unless you wrote by longhand. He called Jack Kerouac a “typist” because he typed all his novels.  Then again, Capote claimed he couldn’t write unless in a supine position and fortified with cigarettes and coffee – sherry and martinis as the day wore on.

Some people say you’re a writer if you’re engaged in literary composition as a profession.  Others say you’re a writer if you’re published or if you’ve earned money from writing.  Look up “write” in the dictionary and you see definitions like “to form letters, words, or symbols on a surface such as paper with an instrument such as a pen” or “to form letters or words in cursive style.”

Am I a writer, then, if I don’t physically write?  If my once proud penmanship sucks?  I suppose it all depends on your definition.  All I know is that I write more than I ever have while writing less than I used to.  Thank you Steve Jobs. I think?

I thought the box elder bugs were kind of cute, the way they hovered around whenever I sat down to write. They were particularly fond of perching upon the wooden pencils I keep in a cup beside my computer.

When I’d shoo them, they’d fly off, a bit annoyed and sounding like miniature helicopters, only to land a more respectful distance away on top of a blue Tiffany’s box in which I store my bills. Naturally, I named them Holly and Fred, after the characters in Capote’s novel.

They even trailed me into the kitchen to watch me cook.

Such behavior isn’t unusual. Large, hairy carpenter bees follow me about the yard like puppy dogs while I cut flowers. A praying mantis once spent an afternoon perched on my shoulder. Some people attract romance, others, danger. I lure insects. I’d like to think they’re drawn to my artistic energy, but probably it’s the carbon dioxide.

I was showing off a few photos of Holly and Fred on my iPhone, when someone more versed in entomology than I said my admirers weren’t box elders. They were stinkbugs — the distinctive shield shape was a dead giveaway. A box elder bug is elliptical and looks more like a lightning bug with a red X pattern on its back.

I was mortified. Box elder bugs were one thing, they sound sort of British and somewhat dignified. But stink bugs?
Stinkbugs get their names because they stink. When threatened, the bug releases a noxious mix of chemicals from special glands located on the dorsal surface of the abdomen and the underside of the thorax.

There are over 250 species of stinkbugs indigenous to North America, including the green sting bug and the great Southern stinkbug. I had neither. What I had, unfortunately, were Halyomorpha halys, more commonly known as brown marmorated stink bugs and also called East Asian stinkbugs. You can identify them by their unique markings: antennae with an alternating dark and light pattern, and black and white markings along the rear edges of the abdomen.

They’re illegal aliens, these stinkbugs, first spotted in this country in 2001, in Allentown, PA, of all places. Scientists think the first few hitchhiked over in cargo containers from China. Since then, they’ve spread throughout the Mid-Atlantic, where they pose some sort of an agricultural threat to apples, pears, peaches, figs, mulberries, soy beans, and tomatoes. But, nobody is quite sure.

People rant and rave about these graceful, slow-moving bugs that don’t bite or sting. Suck them up in vacuum cleaners, they say. Flush them down the toilet, others suggest. Spray ‘em with a strong pesticide. An invasive pest that emits a vile odor is how most people refer to them. Supposedly, they like to get into drapes, and once they get established in your home they’re hard to get rid of.

The thought of dozens of stinkbugs emerging from behind a chintz pillow during a cocktail party just wouldn’t do. I know how vicious these Rehoboth queens can be with their gossip. I scooped up Holly and Fred and tossed them out the window.

After a few days, though, I started to miss their circus antics and buzzing words of encouragement. Writing can be lonely at times. So, despite the pollen and my terrible spring allergies, I opened the windows and set out a little plate of sliced Fuji apples to lure them back. Halyomorpha halys, you see, have a particular affinity for that fruit.

It worked. Within two days they were back and happily sitting on my pencils again where I now observe them with awe and amusement. Let the queens talk. Doesn’t bug me.