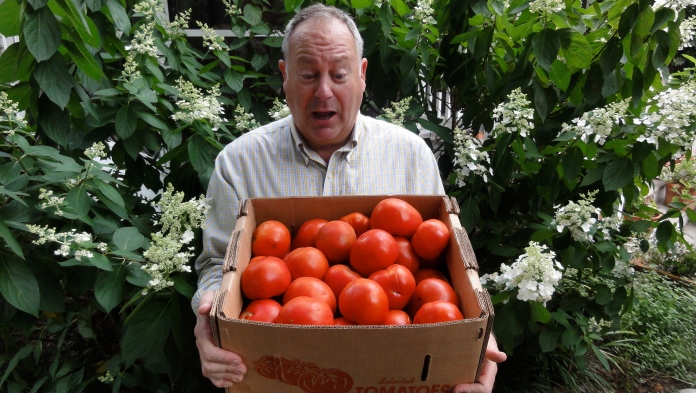 You’ve undoubtedly heard the famous quote by motivational guru Dale Carnegie: When fate hands you a lemon, make lemonade.  Well, what do you do when someone brings you twenty-five pounds of home grown tomatoes?

That was the question running through my mind when I walked into the cottage one Friday night and saw a beer box full of big red tomatoes. I’m not complaining, because I love fresh summer tomatoes, especially sliced cold and topped with a dollup of mayonnaise.  One advantage of the scorching heat we’ve had this summer is a bumper crop of tomatoes.

The sight of so many tomatoes, however, tends to produce a bit of anxiety, especially when you know you’ve got to do something in short order or the tomatoes will start splitting and leaking and growing white mold spots.

That something was filling as many plastic containers of sauce as one freezer can hold. And, making fresh Bloody Mary mix.

In case you haven’t noticed, there seems to be millions of Bloody Mary mixes out there today. Every restaurant owner, bar owner, bartender, and cocktail enthusiast seems to be jumping on the Bloody Mary bandwagon with his or her interpretation of  “the best mix in the marketplace.” Just the other day someone handed me one called McClure’s, a mix made in Brooklyn and Detroit, of all places.  The bottle looked all vintage and cool, but it tasted to me like tipping up a jar of sour pickles and drinking the brine.  An actual shiver went down my spine. Yes, there’s something for every taste and Bloody Mary aficionados aren’t bashful in putting their best recipes forward.

Before 1960, there were no such mixes.  Bloodies were made by hand using plain tomato juice and a variety of spices. Drinkers were at the mercy of the bartender’s skill, or lack thereof.  That’s when an enterprising southern California couple named Herb and June Taylor decided to create their own Bloody Mary mix and ensure a consistent cocktail every time.

The Taylors were part of the movie industry and lived in the Pacific Palisades.  It’s said that June made a popular hors d’oeuvres dip that friends convinced her to package and sell as “Mr. and Mrs. T Dunk.”  While the dip didn’t make it, Herb’s bottled Bloody Mary mix did.  He called it “Mr. and Mrs. T’s Bloody Mary Mix.” It caught on in Los Angeles and before long became an American Airlines standard.  The modern mix was born.  Today, Mr. and Mrs. T is part of the Dr Pepper Snapple Group.  It’s still a top selling mix and comes in an original, spicy, and premium recipe.

While mixes most certainly have their place, a Bloody Mary made from scratch with fresh ingredients is one of summer’s best treats.  And, it’s not that difficult.

I start by picking out big soft tomatoes.  Seconds will do, simply cut out anything that you don’t like. Chop the tomatoes and put them in a food processor.  I use a big bowl and a hand mixer, but a standard Cuisinart will do, as will a blender. Add some celery stalks and leaves.  Puree.

At this point, the mixture is still too thick.  Pour it through a sieve or a pasta strainer and let the tomato water drain into a bowl.  Press gently on the puree to encourage, but don’t rush it.  When you finally have enough water, pour into a pitcher. Add a little lime juice, some Tabasco, a dash of Worcestershire, and a pinch of horseradish.  Let chill. Voila, the best homemade Bloody Mary mix ever.

So now whenever someone hands you a twenty-five pound box of tomatoes – and trust me, they will — you’ll know what to do: make Bloody Marys.

(Photos taken by Donna Hinder, aka “the tomato lady.”)