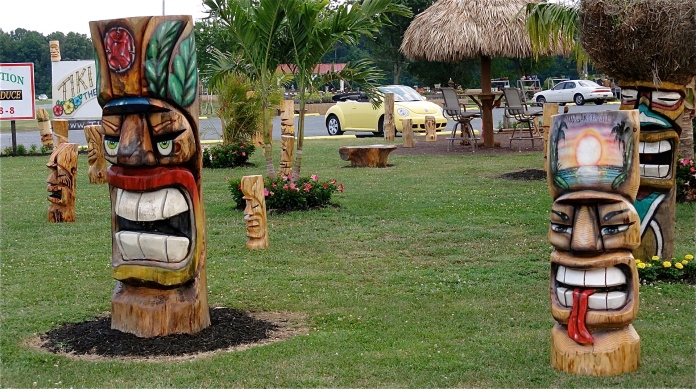 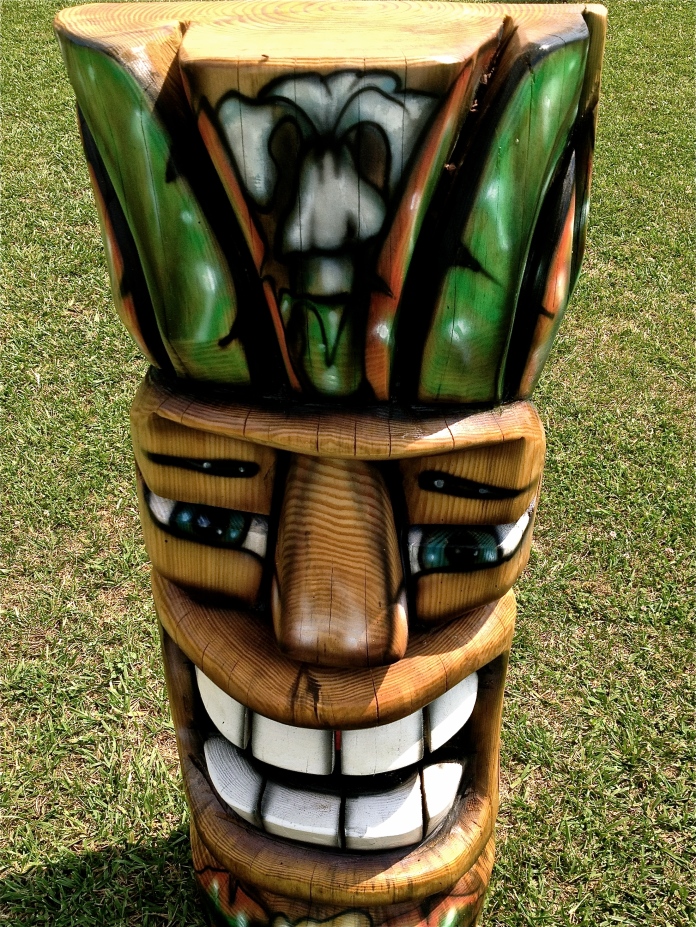 With open mouths, hanging tongues, and toothy grins, the wooden tikis leer at me every time I drive past them.  Some of you have likely been on the receiving end of their sly glances too, and like me have probably wondered who is the artisan behind these mysterious gods on the side of the road in the middle of nowhere on Route One just south of Milford and north of Broadkill Beach?

When I had the opportunity recently to get better acquainted with this little bit of roadside Polynesia as the sidekick to a wild raven-haired friend of mine named Susan Elnicki Wade, I gladly gave up my Sunday afternoon on Poodle Beach to go along for the ride.  Susan, you see, is obsessed right now with tiki.  Major obsessed. She and her husband recently wrote a guide to crab decks and tiki bars of the Chesapeake Bay. So when I told her someone named “Tiki Murph” was selling tikis, tiki huts, and tiki bars over here on Route One in Sussex County, she got here as fast as she could.

During our drive north we sipped on one of those pre-mixed Malibu rum juice bags that she and her “bad mommy” friends favor on road trips and Susan filled me in on tiki culture, which began as a theme and grew into a fad.  It all started in the 1930s when a man named Don Beach opened a Polynesian themed restaurant in Hollywood, California. Trader Vic’s, a chain of South Pacific-inspired restaurants with its signature Mai Tai cocktail, soon followed, as did movies, including the 1937 Bing Crosby movie, Waikiki Wedding. Musicians began integrating Polynesian and Latin rhythms into their jazz.

The big boom, however, came after World War II when servicemen returned home with snapshots and tales of their experiences throughout the South Pacific, including James Michener who won the Pulitzer Prize for his collection of short stories, Tales of the South Pacific, which was the basis for the movie South Pacific.  All these influences romanticized the Polynesian culture and by the time Hawaii became an official state in 1959 it seemed like all of America was embracing the tiki culture.

By the late 60s, however, Polynesian Pop started to decline.  American kids turned their focus to Vietnam and began rejecting the frivolity of their parents’ generation.  Disco balls replaced tiki masks.  But not for long.  Like many things, fads skip generations.  Tiki culture made a comeback in the 80s, driven in no small part by hipsters re-discovering vintage bowling and aloha shirts and the emergence of a small designer in the 90s called Tommy Bahama.

According to my friend Susan, the tiki revival made its way to the Chesapeake Bay as restaurants looking for a way to entertain customers began string colorful lights and serving up Mai Tais, Zombies, and other classic Polynesian-inspired cocktails along with crabs and beer.  Palm trees started popping up along the waterfront and low and behold the tiki gods had found a new home.

How they got to Route One in Sussex County is another story, which we learn when we get acquainted with the one and only “Tiki Murph,” a real journeyman who has been carving totems, tiki huts, and tiki bars in Florida, New Jersey, and now Delaware for more than twenty years. He used to be in the produce business, but, as he explained to us,  “tomatoes spoil, tikis don’t.”  He’s also tried his hand in beer sales.

Tiki Murph carves his statues out of salvaged wood, a lot of which people give him for free. He also employs two painters, one works by hand and the other with an air brush. And while he sells some to bars and restaurants, he prefers to do business with the private collector.  Private collector?  Really?  He claims to sell enough tiki so that he doesn’t have to work in the winter when he hightails it to Florida.  His pieces aren’t cheap, ranging from about $50 up to $700 for a really big tiki totem.  The huts and bars must be over a thousand.

While Susan picked up a nice-sized tiki figure, I hesitated.  For some reason, the gods haven’t taken up residence in Rehoboth and I didn’t want to tempt fate. The closest we come to a honest to goodness tiki bar is Zog’s on the first block of Wilmington Avenue, and establishment that’s actually more Caribbean than tiki with steel drums, rum drinks, and an outside bar and deck. Susan says any bar with a thatched roof that serves rum drinks counts as a tiki bar, and she should know. I’m not convinced.

For the record, I was tempted by one particular tiki.  He was a handsome fella, a blonde with blues eyes and big white teeth.  In the end, though, I couldn’t picture him sitting happily in the middle of my rose garden or nestled among the hydrangeas.  Perhaps I just hadn’t sipped enough of that Malibu rum bag?