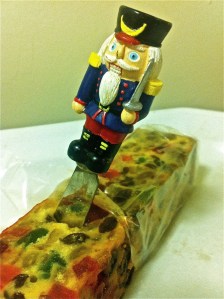 You would think in a town like Rehoboth it’d be easy to find a fruitcake. Alas, that’s not the case. You can purchase a fruit pie, a fruit tart, or a fruit basket, but not a genuine fruitcake.

Thankfully, there’s the Internet, because fruitcake season is upon us and I am jonesing for a fix.

Some of you probably just gasped after reading those words. That’s so plebeian, you’re thinking. Tawdry even. He can’t be serious.

When I was growing up, the fruitcakes began to arrive at our house around mid-November. White boxes from Georgia emblazoned with a horse and carriage drawing and the phrase “world famous.” I never knew which crazy relatives sent us all these heavy brick-shaped fruitcakes every holiday season, but I had my suspicions.

That was back in the days before divorce and death began disabling my family, carefree holidays when we’d use fruitcakes in our touch football games. Just like the Kennedy’s. Did you know it’s virtually impossible to throw a spiral pass with a fruitcake? But you can bust out a window.

I once consumed an entire fruitcake all by myself: twenty eight hundred calories; one pound of raisins, pineapples, cherries, orange peel, pecans, sugar, and rich golden pound cake. At least I think I did. It was back during high school and when I woke up after a night out drinking red grape malt duck I found my bed littered with plastic wrapping and red corrugated cardboard packaging remnants. My fingers were sticky.

The fruitcake, it’s said, may have originated in ancient Egypt or the Roman Empire. The confection was, and still is, widely loved in England where it was originally called plum cake and served at celebrations. Exactly how the fruitcake made it to the New World is hard to determine.

However it got here, it found its place naturally in the rural South. A couple of German bakers seem to have played a major role in starting the Southern fruitcake phenomena. The first was an immigrant baker named Gus Weidmann, who started the Colin Street Bakery in Corsicana, Texas, in 1896. It’s still in business today, shipping about 1.6 million of its Deluxe fruitcakes each year.

Lyle Lovett and Vanna White are among the legions of fans that enjoy Deluxe fruitcakes. Every president since Woodrow Wilson has received one from the Colin Street Bakery. Former White House Chef Roland Mesnier suggests letting the dense Texas fruitcake warm to room temperature and then serve with real whipped cream on the side.

Another German by the name of Savino Tos moved from Brooklyn to Georgia in 1910 to work in a bakery in Macon. He fell in love with the South and eventually opened his own bakery in the little agricultural town of Claxton. He sold fruitcakes during the holidays.

As his business expanded, he hired two young men – Albert Parker and Ira Womble – to help him. Tos eventually retired and sold the Claxton Bakery to Parker. Womble opened his own Georgia Fruitcake Company in Claxton in 1948. Both families still run the bakeries and Claxton is known today as the “fruitcake capital of the world.” Millions are mailed out each holiday season.

Where do they all go? I ask because there’s a lot of animosity out there towards the humble fruitcake. Whole websites are devoted to the rantings of fruitcake haters. People in Manitou Springs, Colorado, gather on the first Saturday in January to toss, catapult, and slingshot away their unwanted fruitcakes.

Some scholars blame the late Johnny Carson and his holiday fruitcake jokes. He once proclaimed that there was but one fruitcake in the world and it keeps getting passed around. Others say its because people are scared of the unnatural green cherries. Most people just hate it and if you ask them why they can’t give you a really sound answer. Sounds sort of like the Tea Party to me…

Fruitcakes come in all shapes and sizes, from cupcakes to loaves to rings that look like hemorrhoid cushions. There are specialty cakes sold by Neiman Marcus and bourbon-laced fruitcakes baked by Trappist monks in Kentucky.

As you might have surmised, I prefer a classic Claxton, one of those dense sweet cake bricks packed with glow-in-the-dark candied fruits. The spam of fruitcakes. Nectar of the gods.