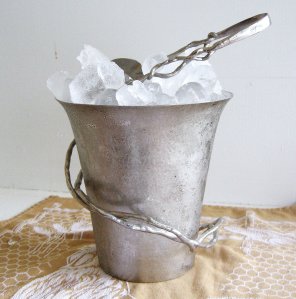 This winter’s home project was a quick, inexpensive facelift for the kitchen. After fifteen years, it was time. Some fresh paint. A new stove. Nothing too extravagant in this economic climate.

For a brief moment, however, I did consider splurging for a new under-the-counter ice maker. It is, after all, one of the great inventions of modern civilization, and there was a handsome eighteen inch Kitchen Aid at Lowe’s that caught my eye.

The first ice maker was patented in Great Britain in 1830 and the first artificial ice manufacturing plant opened in New Orleans in 1868. It took awhile, though, for the industry to develop: it was dependent on electricity, which wasn’t commonplace yet; and, it needed anhydrous ammonia, a substance carefully controlled because it was used in explosives. Up until the 1920’s, many people still relied on natural ice harvested from rivers and lakes.

Ice at one time was cut from Silver Lake in Rehoboth and stored in an ice house south of Dewey Beach near where the Lifesaving Museum is now. Delaware in 1909 had fifteen such ice houses where natural ice was kept before being sold.

I learned all this at the Rehoboth Museum, which, coincidentally, used to be an ice house. The red brick structure was built in 1923 to replace a wooden one prone to mildew problems. The Rehoboth Beach Historical Society was kind enough to give me a copy of a research paper called Keeping Rehoboth Cool: A History of the Old Rehoboth Ice House from which I pulled some interesting tidbits.

The Rehoboth Ice House, for example, manufactured 14 tons of ice every 24 hours during the peak season from May through October. Customers purchased their ice directly or had it delivered in 25, 50, 75, or 100 pound blocks. During the hot summer months, people paid ten cents to drop off their watermelons in the ice house to cool down. Owners carved their initials into the melons.

You’re probably wondering how they kept all that ice from melting in July and August. Seems those in the ice business knew that brick insulated with 4-5 inches of corkboard was enough to provide cool temperatures and long shelf life for stored ice.

As the refrigerator became prevalent after WWII, households no longer depended on ice delivery to keep their food cold, and the retail ice business shifted to serving businesses. At some point during the 1950’s, the manufacturing equipment at the Rehoboth Ice House broke down and the operation became a distribution set up for ice sent by truck from out of town. In 1967, even that ended.

Ice production, however, is still alive and well in Rehoboth. I can’t tell you how many gay households I’ve been in where the ice maker is as prized as the pet dog. In some instances perhaps even more.

Each of these trophy ice makers cost close to a thousand dollars, with installation, and then ended up costing about half that again each year in plumbing and repair fees. Both were kicked to the curb.

Today I get my ice in seven pound bags from the Royal Farms store. I’ll admit this “cracked ice” product is less than perfect, but at least I know it hasn’t been touched by human hands and contains no contaminants. Each bag carries the IPIA (International Packaged Ice Association) label that guarantees its pristine condition.

Refrigerator ice I now use only to fill coolers or to chill white wines and champagnes. You know that ice absorbs odors don’t you? There’s nothing quite like cloudy crescent-shaped ice reeking of fish from the freezer to sully a good gin and tonic. Even worse are those garish purple or blue plastic faux cubes that light up. They might keep your drink cold but they are most undignified.

I wouldn’t go so far as to label myself an ice snob, but I certainly appreciate the importance of fresh ice for proper cocktailing. Even so, not even I could rationalize paying $1,800 – a hundred dollars per inch – for that Kitchen Aid ice maker. One might justify such a cost for, well, other things in life, but certainly not for an ice maker, not even one promising perfect, crystal clear, three-quarter inch cubes. Sigh…