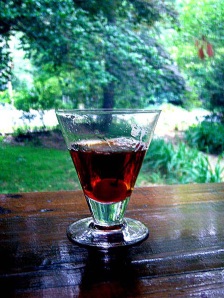 Last summer I penned an ode of sorts to Irenee du Pont, an eccentric and very wealthy gentleman who raised attack iguanas, drank rum with dictators, and advocated not paving Rehoboth’s streets. He liked to refer to Rehoboth as a perfect place for weekend parties, a town of salt water, fresh water, and fire water. I couldn’t agree more.

I’m pleased, therefore, to dedicate this list of Rehoboth-centric cocktails to Irenee and everyone else who enjoys this weird little town and who partakes in some fire water from time to time.

Lucius Beebe, a flamboyant gourmet, and writer, listed the Manhattan in his famed Stork Club Bar Book of 1946 as a morning drink to be drunk before noon because of its “unrivaled tonic qualities as a restorative and element for firming the moral fiber.” He’s absolutely right, though I’d never have imagined it until one of my neighbors began hosting impromptu mid-morning Manhattan parties. It’s mildly decadent, especially if there’s a goody-goody among your crowd who gasps out loud and looks at his watch when he sees a silver tray of the frothy amber cocktails appear. Something about sipping a Manhattan or two on a big screened porch shaded by the pines and hollies on a summer morning and serenaded by lazy old ceiling fans just transports you back to another era.

Here’s the recipe. It’s simple because you don’t want to fuss too much over anything in the morning. Into a Pyrex measuring cup pour Maker’s Mark bourbon and sweet vermouth in a 3:1 ratio depending on how many drinks you’re making and how big your Pyrex is. Pour into a cocktail shaker, add ice, and shake. Garnish cocktail with a lemon twist or a Maraschino cherry. I tend to go for the cherry because it’s easier to just plunk one out of the jar.

A perfect Bloody Mary should be light and not clogged with debris. It should neither taste too much of tomato juice nor of horseradish. Clean and balanced is the key. And, whatever you do, avoid that damn celery stick – it just takes up volume better devoted to vodka.

Bloodies are best served in a red plastic go-cup, never a blue one. That way you can carry it outside when you decide to do a little gardening or to wander down the street to visit with a neighbor. My father gave me this piece of advice. He also says a Bloody Mary just looks better in a red cup. And, you know, he’s absolutely right.

Here’s my recipe, which, by the way, has been very well received by locals and visitors alike. Fill your red go-cup half full of Clamato juice. Add two shots of Rehoboth’s own Blue Hen Vodka. To this base, give two dashes of classic McIlhenny Tabasco sauce, five shakes of Old Bay seasoning, five grinds from your pepper mill, and a couple of squeezes from a lemon. Garnish with a large olive.

The Dark and Stormy

Black rum and ginger beer might be the national drink of Bermuda, but, let me tell you, it tastes pretty darn swell on a dark and stormy afternoon in Rehoboth. It supposedly received its name from some British sailors who compared its look to a summer storm. Most people make the drink with Gosslings Black Seal Bermuda Rum, but, frankly, I find that any dark rum with notes of molasses and licorice will suffice. I like Puser’s Navy Rum, more for the name than anything else.

It’s a very simple cocktail to make: 5 ounces ginger beer + 2 ounces black rum
+ 1 lime wedge. Note that the recipe calls for ginger beer, not ginger ale. There is a difference.

The Back Porch on Rehoboth Avenue serves up a particularly tasty Dark and Stormy, due in part to the fact that they brew their own ginger beer. Over the years they’ve perfected the mix, and it packs a nice punch. I mention this because super talented bartender Bee once gave me the recipe when I had the bright idea of brewing my own. Well, I failed miserably and my cottage smelled like rotten eggs for a couple of days. Too much yeast.

Remember the Yum Yum cocktail? It really caught the fancy of Rehoboth fabby boys in the early years of this new century. A couple of ‘em at happy hour and you’d swear old Irenee du Pont was on the other side of the bar licking shots of Jagermeister off the abs of a hot blonde lifeguard.

Well, I’ve dug up the recipe. Unfortunately, I don’t have the exact proportions, so you’ll have to figure it out on your own — Absolut vodka, fresh lime juice, ginger-lemon grass infusion. Garnish with a dried chili pepper.